Our Bodies Are Not A Distraction 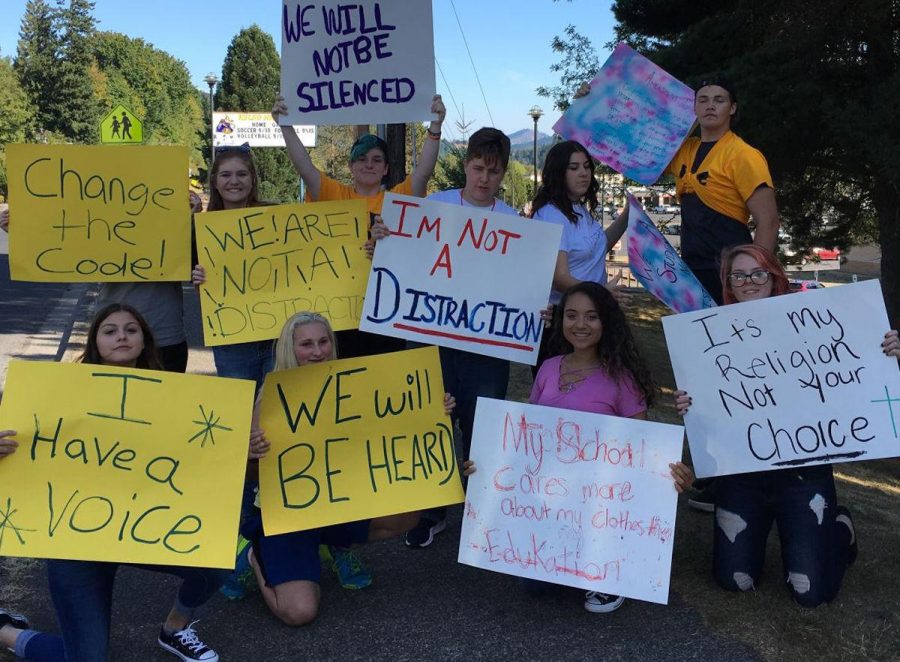 Many students around the U.S. chant, “My body, my choice” while protesting against the school dress code.

Today’s fashion culture is all about expressing yourself. Whether it is the infamous red carpet looks or simply just ‘going out’ looks, fashion has made a change. People look to certain role models, influencers, and people in the media as a way to help convey themselves to others. While some look to fashion as a way to express their individuality, places like schools are taking those creative aspects away from us.

On September 3, 2021, 30 students were threatened with detention for protesting “My body, my choice” when referring to their school’s dress code. This incident took place at Washburn Rural High School in Topeka, KS. On September 10, 2021, nearly 30 students were suspended for protesting against the school dress code at Mustang High School in Mustang, OK. Their posters included phrases like, “I go to a school where the length of my skirt is more important than my education” and “Dress codes are sexist”.

In both occurrences, students feel that the school is “cherry-picking women based off of their body parts that are not common to men.” It is disturbing and unethical that female students get treated differently with clothing than men. The majority of the time, the dress codes put in place never have reasoning behind them, making students (particularly females) wonder why there is a problem.  The wording used to describe the ‘unprofessional’ clothing students wear is unacceptable. The word “distraction” is degrading, making female students feel like they are disgusting and worthless. Referring to the body of young girls being a distraction to the male students is only used to cover up the male staff and administration that cannot seem to keep their attention on anything else but our growing bodies.

A student from Washburn Rural High, Christian Ryan, addressed to the school board, “I think it’s really important that we instill a sense in these young men that they need to protect one another and their female peers. I think it’s belittling to the men of Washburn saying that we can’t control ourselves and making it the young women’s problem.” Ryan further explains that the administration should have discussions with young men about how to compose themselves. It can be guaranteed that the young men in schools are not distracted in class by the clothing of their female peers, but by their phones or their computers. Assuredly, phones are not nearly talked about as a distraction to students as clothing is.

Nevertheless, the school’s dress code to some may seem simple. “No tank tops, no tube tops, no muscle shirts, no spaghetti straps. No revealing or suggestive clothing. Skirts and shorts 1 inch below fingertips.” While the staff developing the dress codes may not intend to sexualize the code, it is very self-evident that most of the “No’s” are targeted towards female students. When walking around the halls at John Adams High School, it is noticed that a girl walking to class with a tank top on, due to the fact that it is hot outside as well as in the school building, gets pulled to the side by teachers or staff. Although this is the fact for girls, it is not nearly the same for the male students. When walking around with muscle tanks and sleeveless shirts, never has it been noticed that they get pulled to the side and asked to change because it’s a “distraction” to the ladies. When a girl’s skirt is above fingertip length although still a respectable length, they get pulled to the side and asked to change. When a male’s shorts are tight-fitting and shorter than hand-length, they are not usually asked to change by staff as much as the ladies are.

All in all, the dress code should be a policy that is gender-neutral. If there are rules in place, they should be made for everyone. With every rule, there should be a reason. It is often found that students don’t understand why the rules are in place. The policy should be more fitting around even those with different cultural backgrounds, requiring certain clothing pieces to be worn. Pieces like hijabs and turbans, and even the afro and dreadlock hairstyles are all a part of cultural backgrounds. And lastly, policies that do not sexually objectify the ladies solely based on their body parts. Using words like ‘provocative clothing’ to describe the pieces girls wear indicates that clothing provokes incidents like sexual assault and harassment, which is very false.

The students have spoken; it is now time for the school corporations to make a change.