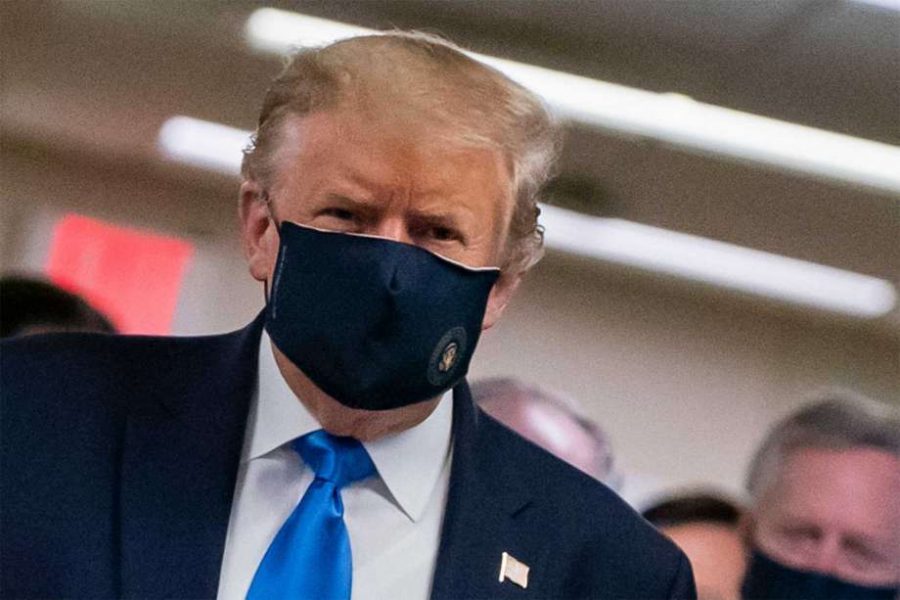 To quote America’s twenty-sixth president, Theodore Roosevelt, “Patriotism means to stand by the country. It does not mean to stand by the president.” These words could not be any more applicable with the White House’s response to the current COVID-19 pandemic. Ever since U.S. president Donald Trump contracted the coronavirus, his actions have been sending mixed messages across the nation.

After testing positive for COVID-19 on 12:54 a.m. on Oct. 2, Trump tweeted about this confirmation. He mentioned in his tweet that “We will begin our quarantine and recovery process immediately. We will get through this TOGETHER!” Although the White House has obfuscated the time frame of when Trump last tested negative and when he first tested positive for COVID-19, it is known that he was admitted into the Walter Reed Medical Center within a few hours of his diagnosis. While Trump received treatment, he commented “I think I am doing very well.” While his recovery is in the benefit of the nation’s stability, his statements seemed sugarcoated. After experiencing minor symptoms and undergoing medical intervention, Trump was released from the facility at 6:30 p.m. on Oct. 5.

However, upon returning to the White House, the still-contagious president continued to negate CDC recommended safety measures. He removed his mask at the Blue Room Balcony to address a crowd of his supporters. This demonstrative gesture appeared to be patriotic to his followers, while others believe it dismissed the gravity of his situation. Trump’s outlook has been inconsistent over the course of his COVID-19 journey. His actions did not model the most reliant example for our citizens, especially him being documented as clinically obese and in the age group with the highest risk of fatality from complications of the virus. As America’s death toll from COVID-19 climbs past 220,000, it is clear that the nation is not combating the pandemic acceptably.

Trump has been questioned as to why he has not been utilizing a facial covering during the public health crisis. He responded that it was his personal preference and that he didn’t want to give the press the pleasure of seeing it. Even though there are enacted mask mandates and social distancing rules in the District of Columbia, these restrictions do not apply on federal land. This means that there are no rules in place that would force Trump to adhere to any safety protocols in the White House.

Even before contracting COVID-19, the president staunchly ignored the CDC’s guidelines and hosted crowded, maskless rallies along with jeering presidential candidate Joe Biden for wearing a mask during the first debate. National Institute of Allergy and Infectious Diseases director Dr. Fauci has inculpated Trump for organizing COVID-19 ‘superspreader’ events which catalyzed the distribution of the virus. Trump constantly used COVID-19 as a means to polarize and divide the political landscape. The president’s deceptive stance on protective measures have become a facet of his political identity over the course of 2020. Trump has an unusually high perception of control about “opening up the states” since he claimed he had “ultimate authority” despite the fact that the governors’ decisions are beyond his supervision. Whether Trump truly intended to or not, he has politicized the virus and it has jeopardized the health of our nation.

In dealing with the public health crisis, Trump had appointed Dr. Scott Atlas to be a pandemic advisor on the White House Coronavirus Task Force. Although Atlas is a board certified neuroradiologist, he has no experience in the infectious diseases field and no background in epidemiology nor public health. Atlas appeals to the president as he advocates for policies that would boost the economy rather than focus on the country’s health. Atlas has proposed the herd immunity concept in which more than 1 million lives would have to be lost in order to achieve it.

During the influenza pandemic of the early twentieth century, president Woodrow Wilson poorly handled the situation, contracted the virus himself, and thousands of Americans died as a result of it. If our country’s leader forgets what happened a century ago, he is bound to repeat history. As the president continues to assemble large numbers of people for his cause, we should question what that cause is and how many would have to die for it.