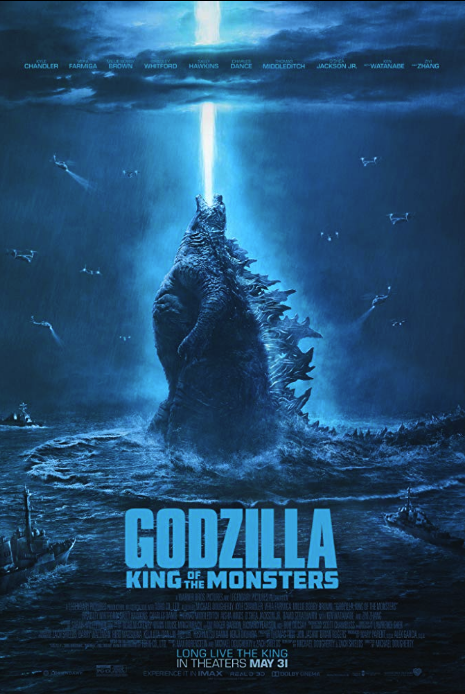 Godzilla: King of The Monsters came out on May 31st, 2019, and while it hyped up to be one of the greatest films of that year, the critics score on Rotten Tomatoes were very negative at a surprising 42% and it made the box office underperform at least $382.1 million dollars worldwide. Critics say that the film is a waste of millions of dollars put into CGI monsters, the characters are generic and convey no emotion, and that the plot is very cheesy. On the other hand, audiences were pleased with the film and say that it was very entertaining and that it was an improvement from its predecessor, Godzilla (2014). The critics are very wrong about this film because they just want more films to rant on.

The film was hyped for a reason, and that reason is that it was one of the best Godzilla films in years. The Godzilla fans who watched the film don’t care about all the  ̈issues ̈ critics pointed out, because they were seeing their favorite monsters, Godzilla, Rodan, Mothra, and King Ghidorah fighting each other in spectacular battles. When you watch a YouTube review video of the film from a Godzilla fan, they express how much they love the film because it brings back elements from the older films from Japan and gives new light on those elements. You can tell when someone is a Godzilla fan because he/she can point out little easter eggs that are references to the older films that ordinary movie goers won’t notice. Even if your not a Godzilla fan, you must understand that the franchise has over 30 films and had definitely made a fanbase that is just as big as Marvel.

For the critics who say that the film is bad, some of them only say that because they think the only company that makes good movies is Disney. Critics get so hyped over for another Disney film, that they forget that there are other companies that make other great films. On April 26th, 2019, Avengers: Endgame was released worldwide and it broke box office records, but it did have a negative effect for other films. Because it was in theaters for at least 3 months, people just kept on seeing it over and over and forget that other films were released or they thought they weren’t as good. One conspiracy that plagus around is that disney pays critics to rant on movies with high audience scores on Rotten Tomatoes, and makes positive reviews on their movies to look like they are the only company that can make masterpieces in films.

If we are to support this film and its creators, then we must do the following. We must remember as humans, we make our own opinions with thinking and logic. Our opinions are not based on others, they are based on knowledge of things we know or don’t know. If you don’t  know much about a certain film or television franchise, then don’t make conclusions that they are downright good or bad. With that being said, the best way to help this film is to gain knowledge on what this film wanted to be, and if you don’t like it , then that’s okay because you gain knowledge of its source material.

Godzilla: King of The Monsters is a great film, but the critics are negative about it. If you don’t like it, then there must be very good reasons instead of judging to conclusions like lots of people who have nor scene it, but saw critic reviews on Rotten Tomatoes.