The Beauty Of: Repo! The Genetic Opera 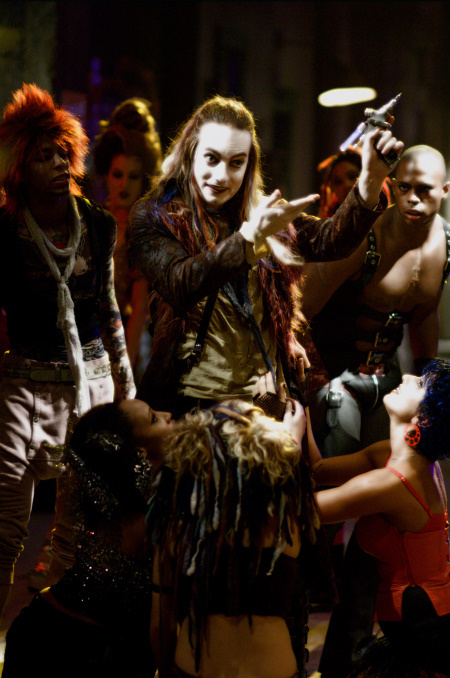 “The Beauty Of” explores media that’s upsetting and wonderful, in every way.

This one has a little bit of violence and some brief NSFW themes.

Healthcare. A big topic for Americans for the past… while. Things aren’t great; people are having trouble paying for necessary medication and treatments, and many are forgoing these and dying simply because they don’t have the money. Now, if you take this idea, intensify it a whole lot, and angrily sing over it for 98 minutes, you’ve got Repo! The Genetic Opera. This 2008 musical horror was made from a 2002 stage production of the same name. It was recommended to me by a friend after I said that I enjoyed Rocky Horror Picture Show, because apparently if you like one you’ll like the other. With this in mind, I ended up watching it with my girlfriend since we both love Rocky Horror so much.

I think it was a good idea to have a ‘buddy’ of sorts the first time I watched. It’s violent, it’s upsetting, it’s just overall a confusing experience for the first time. It begins well enough; with the initial exposition being done through some cute little comic book panel things. Basically, it’s 2056. Organ failure is becoming a bigger and bigger problem, but luckily Geneco can sell you new ones. You don’t even have to make a down payment, but… if you don’t make your follow-up payments on time the organ will be repossessed. This grisly business is done by people called “Repo Men” who just chase you down and slice you open. The head of these Repo Men is Nathan Wallace, some guy with a “sick” daughter (it is revealed that he’s actually carefully poisoning her so that she’ll remain in the house and out of danger) and a dead wife. The “sick” daughter (Shilo) is your typical angsty teen, trapped in her house for her entire life so far and reasonably upset about it. One night, while out chasing bugs (unknown to her father), she encounters a man extracting some sort of glowing blue fluid from a corpse. The man is called the Graverobber and the fluid he’s extracting is a very addictive type of pain-killer distributed by Geneco for the surgeries that have grown so commonplace. The Graverobber illegally distributes it to make his own payments so that he doesn’t get killed by Repomen. One of his most frequent buyers is a woman named Amber Sweet, the daughter of Geneco’s president. His name is Rotti Largo and along with Amber and another two disappointing children, he also has a terminal illness which will soon kill him. He absolutely doesn’t want to leave the company to a surgery-addict, a psychopath, or a sexy psychopath, so he is considering leaving the company and all of his money to Shilo Wallace. This is because she is the daughter of the now-deceased woman who he was at one point engaged to be married to, who left him for Nathan Wallace. After the woman (Marni) left him, he poisoned her and led Nathan to believe that he had done it, so now Nathan is just filled with guilt and fear and blood-lust. A bunch of things happen, Nathan dies, Rotti dies, a singer named Blind Mag dies, Amber tries to take Mag’s place and then her face falls off, Amber’s brother Pavi takes her face and wears it, Shilo refuses to take Geneco, and the three siblings just end up taking over Geneco together and probably end up running it into the ground. The Graverobber presumably just vibes.

Overall, I enjoyed the movie; it had very interesting vibes and grabbed my attention pretty quickly. There wasn’t really ever a dull moment. That said… even if it held my attention it was definitely not objectively good. The music wasn’t bad, but the lyrics were written strangely. I understand that operas are different, but even with that in mind it just didn’t sound right. It was almost cringy to listen to, but as I listened to the songs again I started to unironically enjoy them more and more. Many of the actors have semi-decent voices, and a few have pretty good ones, but not everyone is really spectacular or anything. Honestly, I think it’s just an acquired taste, because at the moment I write this I am jamming out to the entire soundtrack including background music. It’s not good, but god, I love it so much. On a note that’s only slightly related to the quality of the music, Paris Hilton is in this movie as Amber Sweet. I think she was the perfect choice for the role. This is not the opinion held by many, but personally I enjoyed the performance. It was at least accurate to the character, in my opinion.

Speaking of enjoyable performances, my girlfriend and I decided that the best character in the musical is the Graverobber. His voice is wonderful, he desires chaos, and he has too much eyeliner. He may sell drugs that he sucks out of dead bodies, but he has charm and that’s what really matters. It’s not like any of the characters in this thing are actually good people. I’d much rather put my life in the hands of the cool Graverobber dude than the guy who steals and wears people’s faces. He saves Shilo on numerous occasions but he also inconveniences her for no reason. He’s like, chaotic-neutral. Shilo’s father is another character who I love, though I must say I only grew to like him after listening to a bunch of his songs on repeat. The actor drastically changed his voice based on whether Nathan was Nathan, or the Repo Man. Nathan’s continual identity crisis was pretty entertaining, as was watching him reach through a man’s chest cavity and moving his mouth like a puppet before backing up like ‘what did I just do’. That’s the other thing about this movie… if you haven’t gathered, it’s extremely violent and at times almost to an unnecessary extreme. The last scene has a stage absolutely coated in blood, much more than would be realistic. There are many close-ups of surgery and gore and just generally unpleasant things. There’s also a lot of sexual themes, as Zydrate is a euphoric drug that must be injected basically on the crotch.

I think that this is another one of those movies that I highly recommend, as long as you can stomach it. Watch with an open mind and a friend, or maybe even just give the soundtrack a go, as the studio recordings autotune Paris Hilton.