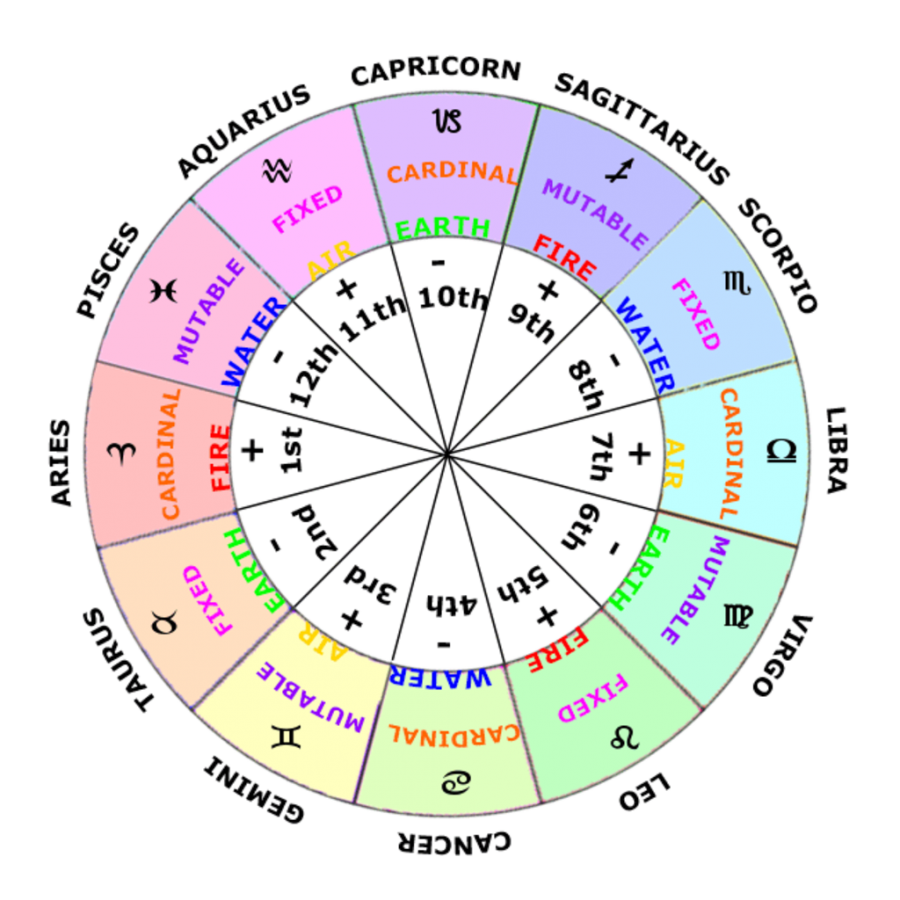 From the classic pickup line “What’s your sign?” to daily horoscopes in the newspaper, astrology is everywhere in day to day life, whether you believe in it or not. But do you know what astrology really is? To put it in simple terms, astrology is a pseudoscience that studies the movements and relative positions of celestial objects. This pseudoscience dates back to the second millenium, and was originally said to be used to predict seasonal changes for farmers, along with signs of communication to and from citizens and their gods. Different adaptations of astrology came into play, hence making connections to personality traits and important life events. Contemporary Western astrology is often associated with horoscopes that are based on the positions of celestial objects. The majority of professional astrologists use and believe in Contemporary Western astrology.

Birth charts are the basis of astrology. It is essentially a screenshot of the planets, or celestial bodies, the very minute you are born in relation to your location and time on Earth. This then correlates to your personality within specific categories. Regular horoscopes in a newspaper or on a social media outlet tend to be extremely general so they can appeal to a larger audience. Your specific birth chart is so much more accurate, and will go more into detail about your natal chart. This essentially means you have different zodiac signs for each planet. It would be extremely rare to have somebody that has personality traits from only one zodiac sign. For example, you may be born January 30th, which would make you an Aquarius based on your Sun, or birth sign, but your Mars could be Sagittarius. These celestial bodies include the Sun, Moon, Mercury, Venus, Mars, Jupiter, Saturn, Uranus, Neptune, and Pluto. Within these celestial bodies are an even more specific category called The 12 Houses. They are essentially twelve different areas of life that may especially shine through for that specific celestial body. This is why basic horoscopes are often very misleading and may turn people off about learning more about astrology and themselves. Cafe Astrology is a great website to get a full birth chart analysis and learn more about astrology in general. All you need to know is the exact time and location of your birth.

My first interviewee’s birth sign was Virgo.“I think astrology is people believing their destiny is based upon stars and moons, and all that stuff. I don’t believe it because my life is determined by what I make of it.” helped my interviewees get a better understanding of what each celestial body stood for, and what the houses mean. After reading their own chart, one of my most skeptical interviewees had surprised me. “After filling it out, a lot of what they told me I really related to. The qualities they said I had were actually fairly accurate, and I was bamboozled by it. Overall it was a really cool experience.”

My next interview, and probably the most adamant that astrology is a hoax was with a Sun sign Aquarius. “What I know is that astrology says that the position of the stars when you were born dictates your personality. My opinion is that astrology is b******t, and is completely not real. People are all independent and nothing is predetermined.

This interview was also with an Aquarius. “I think astrology is people looking toward the stars, moon, and sun for answers about their life, and why they are who they are. I like and am open to astrology, but I’m not a huge believer in it.”

Overall, I was gracious that my friends were even open to the idea of reading their birth charts and letting me know their real opinions. The general consensus was that before knowing more about astrology and their charts, everyone had a pretty negative view of astrology. I was very happy with the results, and that most were able to understand and appreciate something that I am passionate about.