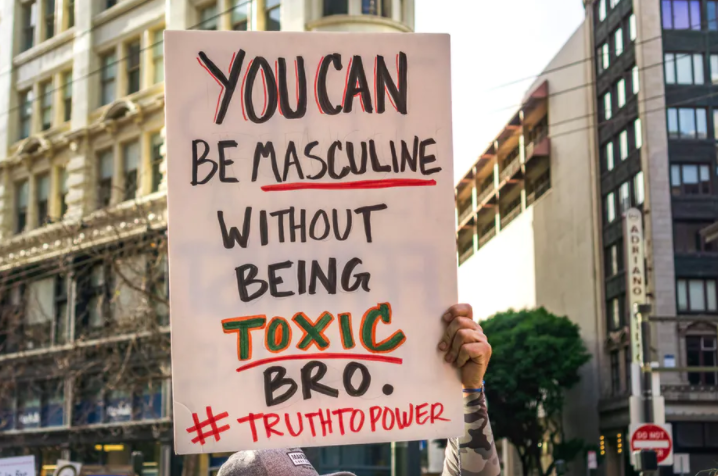 From the beginning of time, men have been portrayed as the more powerful and assertive gender. The masculinity of a man used to define them, but in 2019, the social standards for men seem to be changing. Masculinity is defined as “the quality or nature of the male sex; the quality, state, or degree of being masculine or manly.” The example that Oxford dictionary uses is “handsome, muscled, and driven, he’s a prime example of masculinity.” So is a stereotypical version of a masculine man something that young boys should strive to be?

In recent years, the idea of positive or healthy masculinity has been brought up many times to help redefine the definition of masculinity. There is a very clear generational gap between how grandparents view an “ideal man” and their opinion on how a male should act versus a young person’s opinion. A recent Princeton University article discussed healthy masculinity and the idea that the phrase, “boys will be boys” is not a justifiable excuse for inappropriate behavior. I asked some of my classmates and fellow teenagers to share their own opinions on toxic masculinity and its causes, along with what they personally find attractive in a partner. All of my interviewees believed that toxic masculinity’s negative male energy is a real problem that we’re facing in society. “Masculinity is regarded as the traits that a ‘man’ should have, including taking care of a family, or being strong through hard times. I think masculinity is just a negative societal construct that makes oppressed males who might not want to be as ‘manly’ as other males. In regards to appearance, morals, or likes and dislikes, some men might feel like less of a man and more feminine, but the term is really there so the oppressors can feel good about themselves. It is really the ones who think they are the most masculine that are actually the least.”

Personality, morals, and character quality are ultimately more important than how “masculine” the male sex is portrayed as. “Honestly, personality is a big thing for me, so I really look more for someone that has a good personality over someone who is conventionally attractive in a physical way. I find it attractive when a guy is nice, funny, caring, genuine, and just an overall good person.” The hype with conventionally attractive “manly” men seems to have been deteriorating in recent years, possibly due to  the rise of “e-boys”and “soft-boys” in social media. They are changing the standards for what girls usually find attractive in boys, and even add typically feminine elements to their style and personality. “Toxic masculinity is a term used very commonly, but in 2019 there seems to not be a push to be as masculine as in earlier times. 2019 is more accepting of different personalities, and men who don’t act masculine won’t be ridiculed as much as someone might have been in the 70s or 80s.” Teenage girls in 2019 seem to not be as focused on the physical appearance of a boy, but more on personality and morals. Ultimately, being more accepting of everyone as time goes on helps to let people’s personalities shine.  “I find the ability to hold a conversation very attractive. I am sometimes put off by a guy when they are close minded and are not able to communicate well.” Over-masculine energy seems to be a big turnoff for teenage girls. “Loud, overconfidence puts me off. Guys who are generally rude to others, and who seem to crave having their presence broadcasted everywhere they go. I don’t think a guy should be closed off about their feelings just because they are a male in society, and I really prefer guys that are comfortable talking about anything.”

It may be hard for some people, especially girls, to understand why some men put on a persona to act more stereotypically masculine. “I think men in general try to appear more masculine because that is what they believe women want, and by attempting to do this, they usually act stupid in return.” The majority of men who act in a toxic, overbearing way usually do this because they were raised to be this powerful and masculine image of a man. “Some men think they have to be masculine because they have been raised to be masculine, and are afraid to show as feminine based off of their insecurities. This is definitely a problem that we face today. It can lead to huge emotional problems later in life if not solved now.” In 2019, we as a society have started to learn to be more accepting of everyone and who they want to be. We should be teaching young boys in America about healthy masculinity from a young age, and accept everyone for who they are and who they want to be. “Toxic masculinity is definitely a problem in 2019. Male suicide rates are extremely high due to toxic masculinity encouraging men to repress their emotions. Men are stereotyped to be either strong or effeminate, with effeminate men being seen as weaker. I would like to think I am a counter to that example  since I have an effeminate side, but would still consider myself to be relatively strong and manly.”

Toxic masculinity is even more common in teenage boys then you may think. “I think toxic masculinity is definitely a problem, and I see it pretty often at Adams. I think us men should take more time to let our emotions out, instead of just boxing them in all the time- it’s really not healthy to keep everything in.” Teens are trying to redefine what the image of a good man should be, and are changing societal standards. “I hate how guys have this view on themselves where they can’t show emotion, and are considered ‘weak’ or ‘not manly’. They’re humans just like everyone else–of course they’re going to have emotions. Obviously just because they’re a guy doesn’t mean that they can’t cry or show emotion.”

The majority of my female interviewees prefer their partner to not put on an overconfident and toxic personality as a cover for their insecurities. Every man (and human being in general) should not have to feel like they should hide their personality to abide by societal standards. By developing and overcoming oppressive behavior in 2019, we can help everybody feel comfortable enough to be their true selves.